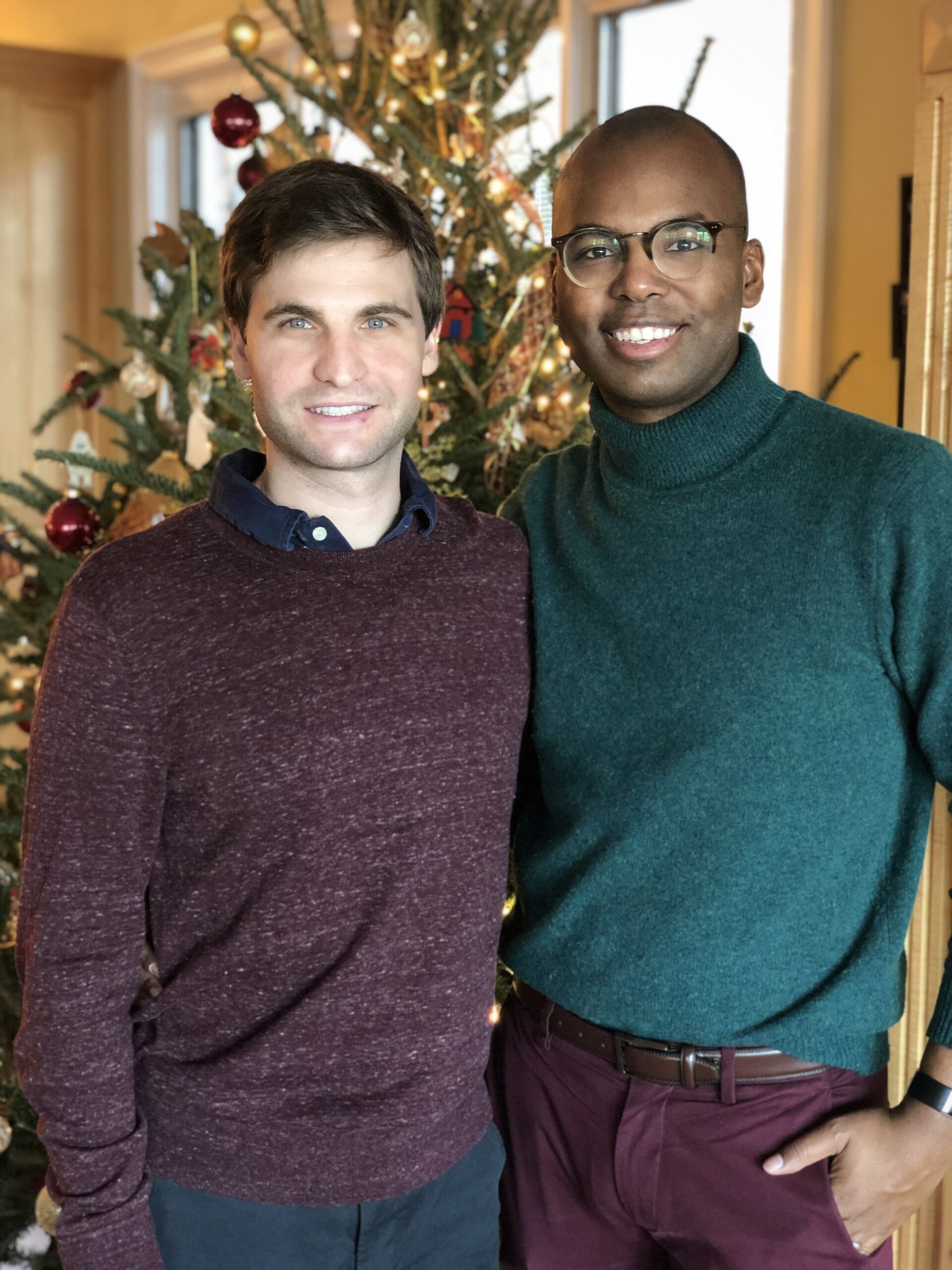 Joe and Johnny began their relationship at the office, of all places. Before Johnny was a lawyer (and back when Joe thought he might want to be one) they were both paralegals at a law firm in New York City. For their first year as coworkers, they were friends and officemates (though Johnny was known for subjecting Joe to frequent office pranks). In the spring of 2014, they began dating, and found that their friendship was the perfect foundation for what would become a lasting partnership. Over the years, they’ve traveled the world together, gone back to school, changed careers, and spent more than a little time in karaoke lounges. In October 2019, they were married in an outdoor ceremony just outside Beacon, in upstate New York, celebrating their favorite season – fall! Almost exactly a year later, they decided to relocate from their Brooklyn apartment to a home in Summit, New Jersey to make room for a growing family (and their ever-expanding DVD collection). They are beyond excited to welcome a child into their lives, and show them lots of love, and more than a few viewings of The Lion King.

Fun Fact
Joe has been watching Jeopardy! Since he was 10 years old and competed on the show in 2017 (sadly, he did not perform as well as Ken Jennings).

Fun Fact
Johnny has been a member of the New York Film Society for more than 10 years, and treats their annual film festival like a two week long holiday celebration.

Since moving to New Jersey in 2020, Joe and Johnny’s lives have struck a balance between quiet nights at home, hosting the occasional (mostly friendly) game night, and traveling to see friends and family (some as close as New York, others as far as California). They are happy to take advantage of living in close proximity to great hiking trails and farms, as well as to the Jersey Shore, where they vacation every summer near Asbury Park. They frequently travel to visit Joe’s family in Charlotte, North Carolina, and enjoy sunny days on Lake Norman with his nieces and nephew. They love exploring new parts of the New York/New Jersey area, and working food into these adventures (they recently completed a pizza tour of northern New Jersey, and are excited to do a doughnut tasting next).

Joe and Johnny both come from close-knit families and enjoy spending time with them as often as we can. They always celebrate holidays with each of their extended families (which are constantly growing through marriage and new nieces and nephews). Johnny’s parents live nearby in Long Valley, NJ, while his brother lives in Jersey City with his girlfriend. Joe’s parents live in North Carolina, and visit the northeast a few times a year, and Joe and Johnny visit them often. Joe’s brother and his family live on Long Island, his older sister and her husband live in Boston, and his younger sister goes to school in Philadelphia. Being so close to where they both grew up and having lived in New York City for almost 10 years, Joe and Johnny have a number of close friends nearby in the suburbs as well as in the city.

“Thank you so much for your consideration and reviewing our profile! We hope that you were able to get a sense of the loving, warm home that we have created, and that you can see you and your child becoming a part of our family.”

To learn more about this Waiting Family or the adoption planning process, call us at 800-321-5683 or email us at [email protected]